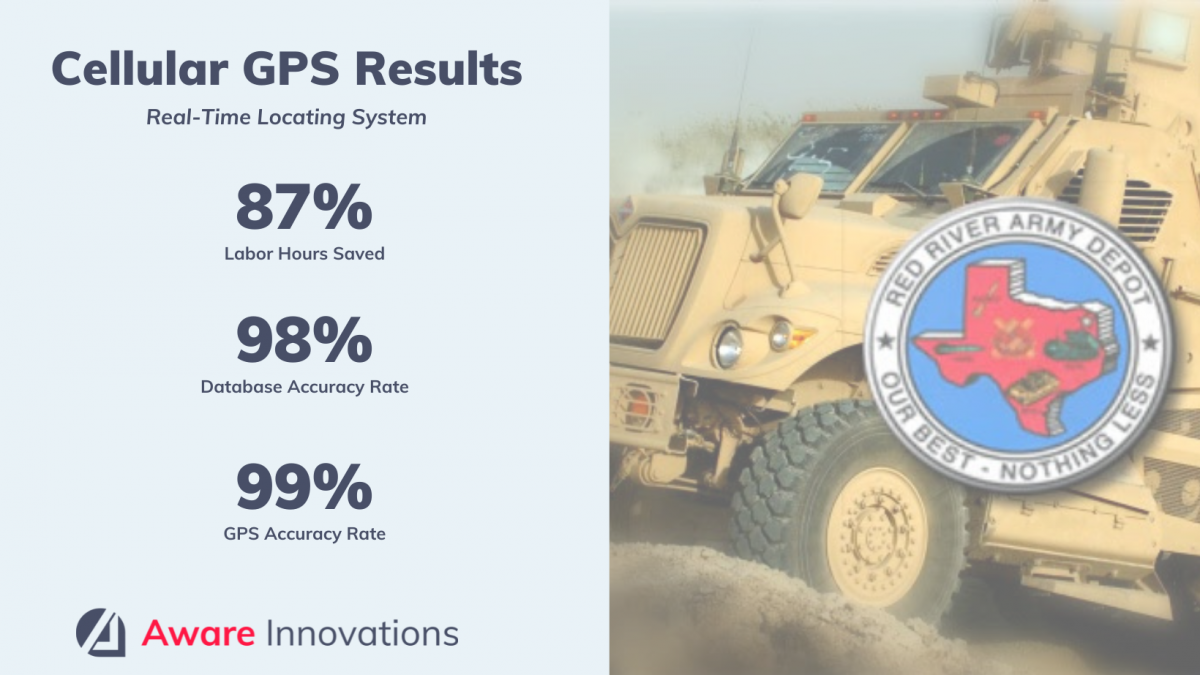 The Defense Logistics Agency’s Red River Army Depot reduced wasted personnel hours by 87%, using cellular GPS to track 23,000 military vehicles. During this pilot, the DLA was able to reduce the time it took to find a vehicle from upwards of 8 hours per vehicle to 30 minutes or less using Cellular GPS.

Evanhoe & Associates, Aware Innovations’ parent company at the time, was contracted to implement a real-time locating system for DLA as a pilot for 3 years. Bart Ivy, our Director of Automatic Identification and Data Capture (AIDC) Solutions, conducted a site survey, market research and a concept of operations (CONOPS) for DLA, recommending Cellular GPS as the best technology solution for their use case. DLA accepted the proposal, allowed Evanhoe (Aware) to execute the solution and saw the following results:

The Defense Logistics Agency (DLA) sought to establish a materiel asset identification and location tracking system for 23,000 vehicles on its 15,375-acre lot in Red River Texas. With vehicles stored on 24 different sites on over 9 million square feet of storage, locating them was a tremendous task, and one that involved manual data uploads. This project resulted in site surveys and multiple reports on solutions, as well as an execution of the system for 3 years.

DLA wanted a system that:

CSRA International had an existing pRFID III contract with DLA and was awarded a task order under that contract to implement what ended up being a pilot. CSRA used Evanhoe & Associates, Aware Innovations’ parent company at the time, as their technical Engineering partner. Bart Ivy led a team to execute this solution once Cellular GPS was chosen.

If you want to learn more about Red River’s mission with these vehicles, watch here.

Background: What Is the Defense Logistics Agency?

The Defense Logistics Agency (DLA) was started in 1961 to manage supplies for the US military. Today, it continues to support the US warfighter with locations in nearly every state and in over 28 countries worldwide.

The DLA provides more than $41.8 billion in goods and services every year, supporting more than 2,400 weapons systems and employing 26,000 civilians and military. It manages nine supply chains and nearly 5 million items. The focus of this use case is on their Red River Army Depot (RRAD).

Opportunity: A Manual Tracking Process That Proved Inefficient – And Dangerous

The Army Depot’s System of Record

The Distribution Standard System (DSS) is the Army Depot’s system of record. Not included in the DSS’ core functionality, however, is specific data necessary for uniquely identifying and tracking vehicles. The Vehicle Tracking System (VTRC) was developed to remedy this, providing fields for serial number, NSN, condition code, ownership code and location. However, there is no interface between the VTRC and DSS, so personnel must manually enter all data long after the work is accomplished. This makes it prone to error in keystrokes, the same data being entered differently, and induced data latency and inaccuracy if manual paperwork had discrepancies.

The massive quantity of vehicles stored over such a large distance posed a challenge to RRAD. Finding and identifying each vehicle took hours. Historical records show that if any errors were made in the manual record keeping process, the identification process was prolonged – even up to 8 hours. Additionally, these vehicles are involved in nearly 15,000 official moves (issues and receipts when the Depot receives and deploys vehicles FY to date; or 1,994 per month), which adds more complexity.

“Imagine going to a mall in a white Prius,” Bart Ivy, Evanhoe’s (Aware Innovation’s) director of the AIDC project at RRAD states, “you come outside after shopping and there are 500 white Priuses parked next to you. This makes your Prius nearly impossible to find. The vehicles at RRAD are this scenario times ten. All of them the same, across miles of land. And the RRAD team is tasked with finding an exact one.”

In addition to the quantity of vehicles and the scale of the property, the terrain and outdoor elements in this location posed their own threats.

Many of the tags became eroded over time due to inclement weather. Employees who were trying to identify these vehicles had to wade into knee-deep mud in some areas, with brush up to their chests. Wildlife is also an issue in Northeastern Texas and interacting with rattlesnakes is not uncommon. The identification process also required employees to climb up onto the vehicle, posing physical challenges to some.

Given the many challenges that faced DLA’s tracking process, the Defense Logistics Agency published requirements for a real-time locating system that included:

The DLA also required that the technology used be based on international standards to allow for competitive bidding of equipment as well as technologies that are readily available on the commercial market.

Cellular GPS would be quick to deploy, with no infrastructure – eliminating costly requirements like moving vehicles for installation or long-term maintenance costs for structures that are in harsh conditions. GPS would also provide agility in parking requirements and vehicle movement that infrastructure would otherwise restrict.

Cellular GPS is over-the-air programmable, and motion sensor data and telematics can be transmitted to the software application that would interface with DSS. Each tag has an estimated 5–7-year battery life, making it the best long-term solution. It would improve location accuracy and provide instant updates when equipment is moved without user intervention.

The tags can also be associated with various items, allowing the DLA to reuse them, and provide a visual overlay on the ItemAware software app so that personnel can drive right to the vehicle with the provided route from their current location.

Execution: The Road to Automation

Decision-Making and Installation of GPS

Bart Ivy and 20 team members then deployed to tag all vehicles, associate the tags to the vehicles, and connect them to the database over the course of four months.

They connected the GPS to an RTLS module that allows multiple technologies from multiple locations to transmit data to the DSS and its subsystems. This technology included four main components: Edge Collection, Event Processor, API/Web and datastore. These four components integrated to create a complete system for managing, tracking, and inventorying containers and components therein. The ItemAware Asset Tracking and Inventory Management Software was selected to interface with DSS and display data to users. ItemAware has intuitive map features; item data, location, and status tracking; and much more.

“The genius of this system is integrating all data from all sites with multiple technologies into the DSS, allowing users to pull multiple data sets from one system.” Bart Ivy stated, discussing the efficiency it created by connecting not only the information at Red River, but multiple sites across the U.S., allowing verified users to access the information they need, instantly.

Evanhoe (Aware) developed custom interfaces with the DLA and Army Enterprise system and developed customer applications to support DLA’s work processes, enabling them to utilize this new technology and leverage its capabilities.

Tags that the DLA had already purchased were opted for over the recommended tags, in order to save money. To make these work for the use case, the team had to address a couple issues:

First, the team discovered that the GPS location being reported by the tags was not their actual location.  After back-and-forth with the manufacturer, the manufacturer discovered they had made an error in their hardware configuration management resulting in several hundred tags’ SIM chip being associated to the wrong tag serial number.  Once resolved, the location of the GPS tags was accurate.

Secondly, the solar battery did not work well with the location of the equipment. As expected, solar power tags require sufficient sunlight to power the system; however, not all equipment was parked in locations where they received enough power to recharge the battery. When the tags were removed from equipment and stored until required again, they would not charge sufficiently to power the tag’s hardware. To resolve this issue, the removed tags were attached to the outside of the building to allow the tags to retain their solar charge. When the tag worked, the location accuracy was excellent.

Numerous data error problems that stemmed from manual entries had to be cleaned up and resolved during the data interface process. The team spent hours writing a script to clean the data prior to importing the data into the RTLS system, increasing the accuracy rate to 98%.

The Evanhoe (Aware) team was able to meet the DLA’s requirements for an efficient system that tracked 23,000 vehicles in real-time, giving users instant location updates and directions to every vehicle tracked. It met data accuracy requirements and allowed verified users across the DLA to access information. The DLA continued to run this pilot over the course of 3 years. The management changed at that time and took the program a different direction, but we saw the following results in the meantime:

Our solution cut wasted time by over 87% – reducing the time it took to find a vehicle from 8 hours to 30 minutes or less. The vehicle’s location was able to be pulled up immediately, a pin shown on a map, and a route mapped out to get the user to the vehicle in the most efficient way possible. The amount of time it takes to reach a vehicle depends on the user’s current location but with our solution, it could be done in under an hour. This allowed DLA to repurpose 7-man hours per vehicle to focus on other work.

Scrubbing and entering correct data into the system made the database meet the requirements of a 98% accuracy rate.

The system was designed to verify authorized users by comparing their PKI certificates against an authorized user list.  User roles and permissions were used to control the level of access to the system data once authenticated.

Our team was able to design and execute a successful real-time locating system that met the requirements of the government and all stated goals of the project provided by the government.

Elyse Cheatwood is our Marketing Manager. With ten years in marketing and ever-increasing knowledge of the Automated Identification Data Collection (AIDC) industry, she creates research-driven content based on market trends, industry updates and tech insights from reputable sources (including the professionals she works alongside). 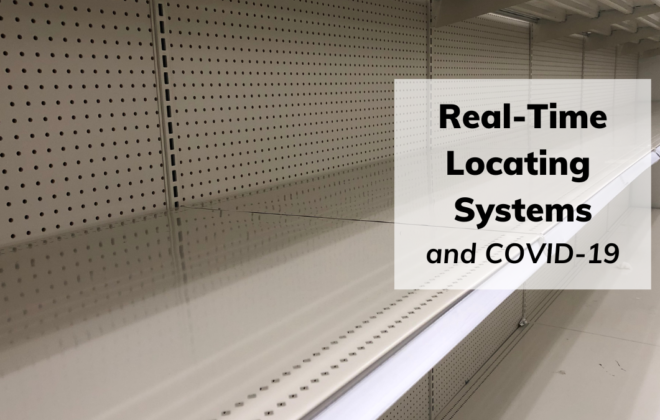 RFID – What You Need To Know

ItemAware: Primed for Growth as Use Cases Continue to Rise

This website uses cookies to improve your experience while you navigate through the website. Out of these, the cookies that are categorized as necessary are stored on your browser as they are essential for the working of basic functionalities of the website. We also use third-party cookies that help us analyze and understand how you use this website. These cookies will be stored in your browser only with your consent. You also have the option to opt-out of these cookies. But opting out of some of these cookies may affect your browsing experience.
Necessary Always Enabled
Necessary cookies are absolutely essential for the website to function properly. This category only includes cookies that ensures basic functionalities and security features of the website. These cookies do not store any personal information.
Non-necessary
Any cookies that may not be particularly necessary for the website to function and is used specifically to collect user personal data via analytics, ads, other embedded contents are termed as non-necessary cookies. It is mandatory to procure user consent prior to running these cookies on your website.
SAVE & ACCEPT
Go to mobile version