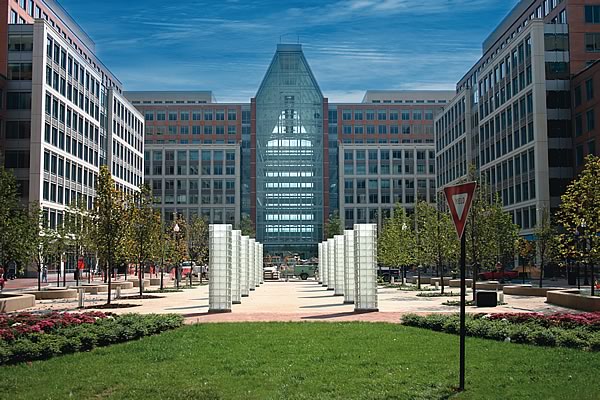 Aware Innovations tagged and tracked 120,000 IT Assets across 8 buildings and 5 states. Within two-and-a-half years, the USPTO saw a return on their investment with the following results:

To see a video on this use case, interviewing Tom King at the USPTO, click here: Video Interview: USPTO Saves $1.2 Million Tracking Assets

The United States Patent and Trademark Oﬃce (USPTO), a performance-based federal government agency, is funded by the fees charged for ﬁling patent applications and trademark registrations. Its mission is to administer the laws and regulations related to patents and trademarks in order to promote industrial and technical progress in the United States, and thereby strengthen the domestic and global economies.

The agency falls under the Department of Commerce (DOC), which requires all bureaus and oﬃces to inventory assets annually. To meet the DOC’s mandate on time, the USPTO conducted inventory counts four times annually. Property accountability oﬃcers (PAOs) and property custodians (PCs), including senior-level executives and GS 14- and 15-level employees, were responsible for conducting the counts. Some of the PCs are also patent and trademark examiners who review applications. These employees spent roughly 7,700 hours a year managing assets rather than reviewing revenue-generating applications. The USPTO also found that, on aver-age, a patent and trademark examiner often spent up to six hours every year verifying equipment.

Tom King, who works in the Oﬃce of Administrative Services (OAS), is responsible, along with Vickie Bryant, for overseeing the Chief Administrative Oﬃce’s (CAO) property and asset-management programs at the USPTO. King and Bryant were both aware of how time-consuming the asset-inventory process was, and of the impact on the agency’s mission. They knew there had to be a more eﬃcient way, and thus reached out to Wes Clark, from the Oﬃce of the Chief Information Oﬃcer (OCIO), to discuss ideas.

“By and large,” King says, “most government agencies consider asset management to be secondary compared to their main mission. We saw that automating the location and movement of our assets with RFID technology would allow us to spend more time fulﬁlling USPTO’s main goals.”

In September 2016, the USPTO deployed an RFID asset-tracking solution. The system monitors more than 115,000 IT assets at multiple locations and spans more than 160 ﬂoors where nearly 15,000 federal employees and contractors work. The expected return on investment for the $2.8 million project is 18 months, King says. So far in Q3 of 2019, 120,00 assets have been tagged.

In 2014, Clark, Bryant and King began to investigate RFID to determine whether the technology could be put to work to address the USPTO’s inventory problems. King had read an article about Walmart’s use of RFID to track inventory. He called asset managers at other government agencies and learned that the U.S. House of Representatives was using the technology in con-junction with Remedy (now BMC Software) enterprise resource planning (ERP) software, which the USPTO also employed. The House was RFID tracking its treasure trove of historic furniture, and King ﬁgured that since furniture is an asset, the system the House was using would work to monitor the USPTO’s assets.

King, Clark and John Hassett, who was the director of OAS at that time, decided to pay the House of Representatives a visit. The House property managers showed them how they were using RFID to quickly verify furniture location information contained in their ERP. “We learned that the technology behind RFID isn’t complicated or hard to implement,” Clark says, “but it rep-resents a new way of thinking about asset management, and how to let technology do the grunt work." 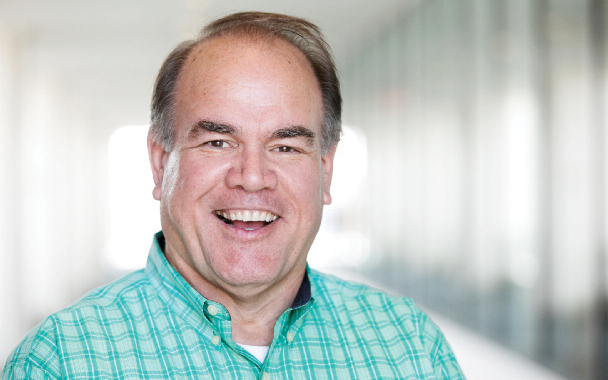 "We learned that the technology behind RFID isn't complicated or hard to implement." - Wes Clark

The USPTO received budget approval from the Oﬃce of Management & Budget. In July 2014, the USPTO notiﬁed the indeﬁnite delivery/indeﬁnite quantity (IDIQ) contract holders that it needed quotes for an RFID-based asset-tracking solution.

Digital Technologies Inc. (DTI), an IDIQ contract holder, had been providing IT infrastructure, management and support services to the USPTO for many years. A web search brought DTI to Aware Innovations, an RFID systems integrator in Dayton, Ohio. DTI learned about Aware Innovation’s work with the federal government, including an RTLS-based asset-tracking solution for the U.S. Air Force that they were updating and managing at the time. DTI partnered with Aware on the proposal, and the company was awarded the contract.

The ﬁrst step for such an expansive project was to develop a project management plan. All work had to be coordinated and scheduled with King and Bryant, who was the contracting oﬃcer’s technical representative for the USPTO. The project was divided into four phases: site surveys and cost estimates, choosing tags and testing software offsite, installing hardware and tagging assets at the Alexandria Campus and then rolling out the solution at the other USPTO locations.

Site surveys were conducted from late October 2015 through February 2016, in order to identify existing RF environmental factors and any business-process issues that would drive the need for speciﬁc equipment and tags. No extraordinary challenges were dis-covered, says Chuck Evanhoe, the company’s founder. DTI and Evanhoe presented costs estimates for implementing the RFID solution at each location.

Impinj Speedway xPortal R640 readers were installed at the base of public stair ways, because they are esthetically pleasing.

DTI and Evanhoe selected Metalcraft Universal RFID Asset tags, which are designed to work on metal, plastic and wood surfaces. The passive ultrahigh-frequency RFID tag has a read range of 15 to 27 feet, depending on the material to which it is aﬃxed. Laptops and other mobile assets required read ranges of 17 feet. DTI and Evanhoe also developed a guide for the support personnel who would tag all the USPTO assets. IT support contractors completed the nationwide asset tagging project within 90 days.

All told, 440 Impinj Speedway Revolution R220 and R440 ﬁxed readers were installed in hallways and doorways, as well as at emergency exits. Location determinations were based on the site surveys and the USPTO’s business requirement to track assets as they move from one ﬂoor to another and into and out of buildings. The R220 reader has two antenna ports, while the R440 comes with four ports; in total, more than 1,100 antennas were installed to support the system.

Speedway xPortal R640 readers were installed at the base of public stairways to detect ﬂoor-to-ﬂoor movement. The devices were chosen because they are esthetically pleasing, King says. Impinj xArray R680 readers were used at building entrances and security check-points, where wide-area monitoring was required. In addition, 10 Alien Technology ALH-9001 handheld readers were purchased to support inventorying.
The software platform is an enterprise-level application that resides on the USPTO’s network servers. The system can be readily integrated with the Remedy ERP, capturing data from tag reads and providing real-time visibility into assets’ locations. According to King, the user interface was simple and direct, and the fact that it could be seamlessly integrated with the existing system was key.

DTI and Evanhoe provided training for two Oﬃce of Administrative Services asset managers (who have administrative rights) and for four inventory support team members (who would monitor assets’ locations and report if assets were lost, missing or stolen). Other workers can access general IT asset ﬁnancial data, as well as warranty, maintenance and surplus information, via the Remedy ERP system.

There were few major obstacles in deploying the system, King recalls, though working through the USPTO’s network, ﬁrewall and security requirements proved cumbersome at times. 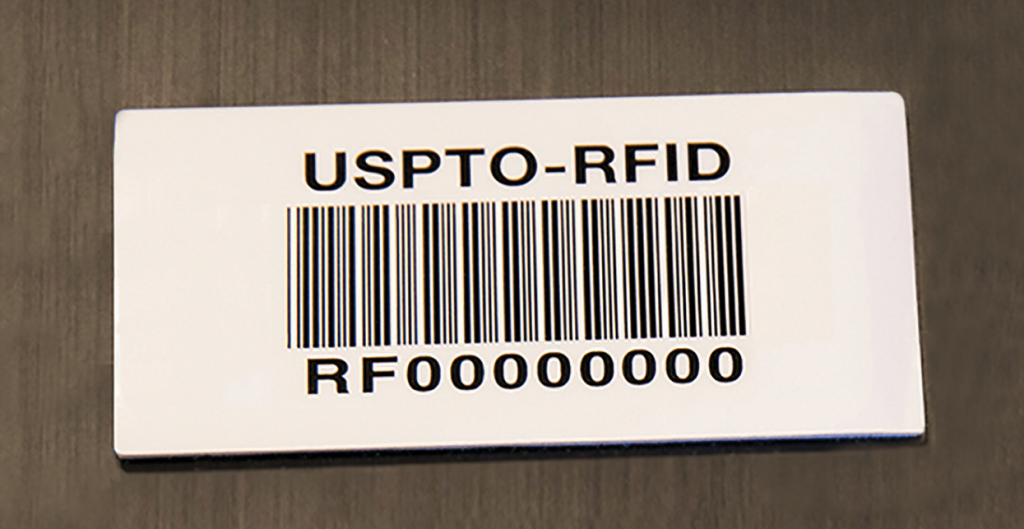 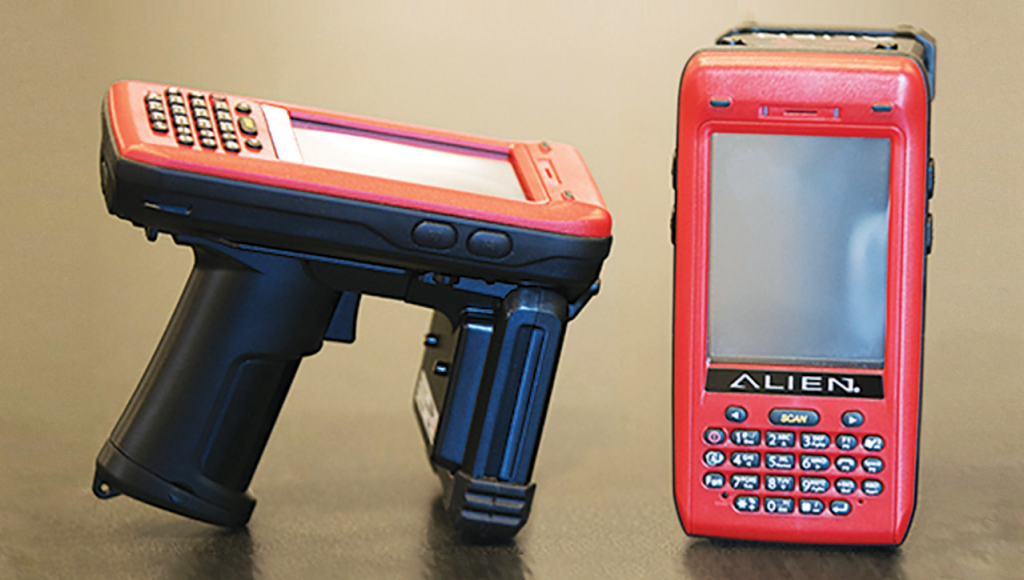 Before the RFID Solution was implemented, ﬁeld technicians had to manually update asset location information when they moved equipment and assigned it to a property custodian. Currently, as assets travel around the USPTO’s facilities, the RFID system automatically monitors their movements. In the future, the system will also track assignments to property custodians. All the information is automatically updated in the ERP software. The result is a signiﬁcant reduction in the number of errors.

On the last business day of each month, workers use handheld readers to verify each asset’s location, then update this information in the ERP system. “The handhelds can read hundreds of tags in a matter of seconds,” King says, “so it really isn’t a major deal.” Every month, the system produces a report on any assets not “seen” (read) within the previous 30 days. Knowing where the last reported location was and who removed the asset, he explains, allows for quick action and resolution.

The USPTO examiners are back to work reviewing patent and trademark applications and driving revenue, rather than chasing missing assets and conducting inventories. By the end of ﬁscal year 2017, the USPTO expects asset management hours to be cut in half.

By end of ﬁscal year 2018, the number should be closer to 800 hours annually. “Any diligent asset-management process requires constant involvement from staff,” Clark states, “but automating the process with RFID requires far less of it.”

“With automated asset tracking and management,” King adds, “we can spend less time thinking about where things are and more time planning for future requirements.”

Next up, the USPTO would like to require some vendors that supply new equipment to RFID-tag assets before shipping them to a USPTO location.

“I think over the next year or two,” King says, “we may very well see the use of RFID expand once folks see how successful we’ve become in achieving our goals.”

By 2018, the U.S. Patent and Trademark office was tracking 120,000 assets with RAIN RFID and ItemAware Asset Tracking and Inventory Management Software. This resulted in tremendous cost savings:

To see a video on this use case, interviewing Tom King at the USPTO, click here: Video Interview: USPTO Saves $1.2 Million Tracking Assets

This use case was published by RFID Journal - the World's RFID Authority, and was written by Lauren S. Roman.

Lauren S. Roman is the managing director of TransparentPlanet, which provides AIDC companies with new strategies for promoting and growing their businesses.

This website uses cookies to improve your experience while you navigate through the website. Out of these, the cookies that are categorized as necessary are stored on your browser as they are essential for the working of basic functionalities of the website. We also use third-party cookies that help us analyze and understand how you use this website. These cookies will be stored in your browser only with your consent. You also have the option to opt-out of these cookies. But opting out of some of these cookies may affect your browsing experience.
Necessary Always Enabled
Necessary cookies are absolutely essential for the website to function properly. This category only includes cookies that ensures basic functionalities and security features of the website. These cookies do not store any personal information.
Non-necessary
Any cookies that may not be particularly necessary for the website to function and is used specifically to collect user personal data via analytics, ads, other embedded contents are termed as non-necessary cookies. It is mandatory to procure user consent prior to running these cookies on your website.
SAVE & ACCEPT
Go to mobile version